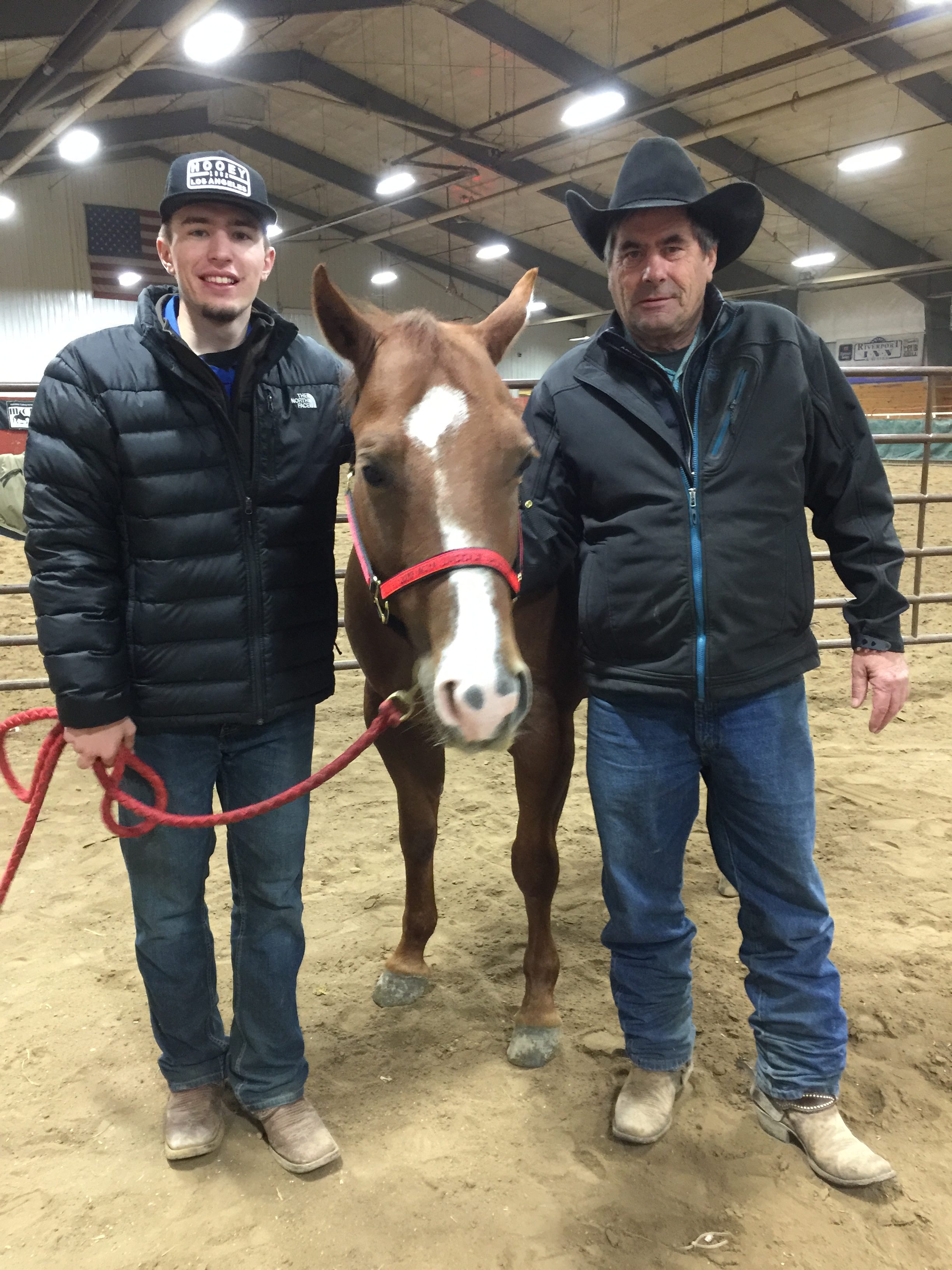 In his high school days, Brian Cottrell rose most mornings at 3:30 to help milk the family’s 40 cows. This was near Finlayson, about an hour south of Duluth, and the youngster’s farm work would continue a couple of hours. Then he’d power-nap before boarding the yellow bus that stopped at the end of the family’s driveway, ready again for a day of school.

The young boy didn’t begrudge the labor the cows commanded. But neither was he intrigued by them the way he was by horses. His grandpa was a draft horse trainer who had taught a stud of his to jump into the back of his truck. Mares at the time expected their paramours to come to them, not the other way around. So grandpa and his stud rode the circuit.

“That horse would jump into the truck without a problem. He knew where he was going,’’ Brian, now 60, said. “Grandpa didn’t always get paid in cash. Sometimes he’d come home with eggs or a couple of chickens.’’

Brian was recalling this a short while after he won a new saddle last weekend at the Minnesota Equestrian Center in Winona. A cutting horse rider, he was aboard Moneymaker, his 8-year-old gelding, when he marked a 75 to best a veritable bunkhouse full of riders who also had their eye on the new stirrup-hanger.
That Brian won the event’s top prize was a good thing, he said. That his son, Cody, 19, was there to hoot and holler for him as he laid down a memorable run, was better.

A sophomore at Winona State University, Cody passed his high school years spending most weekends with his dad at his place near Finlayson, while during the week he lived with his mom in Cambridge, where he attended Cambridge-Isanti High School, playing basketball and running track.

Bonding Cody and his dad tightest over the years have been the long miles they’ve passed together crisscrossing the nation delivering horses. Texas and back. Colorado and back. East coast and back. For Cody, these were summertime trips, made when he was out of school, and the horses in the trailer behind were hunter-jumpers, pole benders, ropers, cutters, reiners, sorters, penners — whatever. Some were en route from sellers to buyers; others to competitions. Either way, they paid the same, and when Cody and his dad pulled into rest areas or truck stops to catnap, the animals rocked the rig gently.

“It’s fun hauling with my dad,’’ Cody said. “We’ve had a lot of great conversations. I also learned a lot about horses on the road. Sometimes while moving them from place to place. Sometimes while meeting and talking to trainers. Sometimes by watching trainers work horses. You can learn a lot about horses by watching.’’
A basketball junkie who hopes someday to coach, Cody lost his initial interest in horses when at age 10 he was bucked off. “I didn’t ride for a long time after that,’’ he said.

His dad, however, from the time he was knee-high to his grandpa, never lost his love of horses, and at one point kept some 20 head at his place, breeding and selling quarter horses and paints.

“It got kind of crazy,’’ Brian said. “I had all these horses, and for a time I was working in Rochester and driving back and forth 178 miles each way every day because I had no one to take care of them for me.’’

The elder Cottrell’s cutting career began about 15 years ago when he met Dave Scribner, a trainer in Stacy, Minn., and the late Bob McCutcheon of River Falls, Wis.
“The first cutting horse I showed was a 9-year-old gelding,’’ he said. “That was in Fergus Falls, and I was so nervous I actually made myself sick. But I showed, and I’ve been hooked ever since.’’

Wanting to be with his dad, Cody would travel to cuttings and sometimes lope horses to prepare them to show. But until about four years ago, he had never ridden into a herd of cattle.

“Finally, dad said, ‘You’ve got to try it,’ ’’ Cody recalled. “So I said ‘OK.’ I practiced a little bit first, then rode in. I was on a horse named Peanut. He really carried me through. I won the class and have been hooked ever since.’’

So it was last weekend when Brian had separated his first cow from a small herd of cattle and dropped his rein hand to his horse’s neck to begin the ride of his life, Cody, his biggest fan, was the arena’s loudest cheerer, and proudest.

A day later, with his new saddle safely in hand, and after the other riders had loaded for home, Brian took down the show’s livestock panels, returning the arena to its original condition.

Cody could have been back at school, studying, or playing a pickup game of hoops. Instead, he worked alongside his dad, and happily so.

“For Cody and me, being together with horses has been the best,’’ Brian said. “Together, we set up shows, then we cut, then we take the shows down together. After that, until the next time, we say goodbye. That’s something.’’

Jack Bell, son of MCHA members and trainers JP Bell and JoLynn McDonald, has ridden his good horse Spin to You (Mr Boonsmal To You x Spin N Roses x Docs Spinifex) to winning rides throughout this show year.

Those championship ways continued in Fort Worth recently, both on Spin to you and also on Fed Exx (Spots Hot x Shes Twice As Smooth x Smooth As A Cat), owned by Nancy Burkes of Hibbing, Minn.

In the NCHA Junior World Finals, Jack saddled up Fed Exx, and in the NCHA Junior Youth Scholarship Finals, he rode Spin to You.
We caught up with Jack at the Minnesota Cutting Horse Association State Fair cutting and posed seven questions to him. 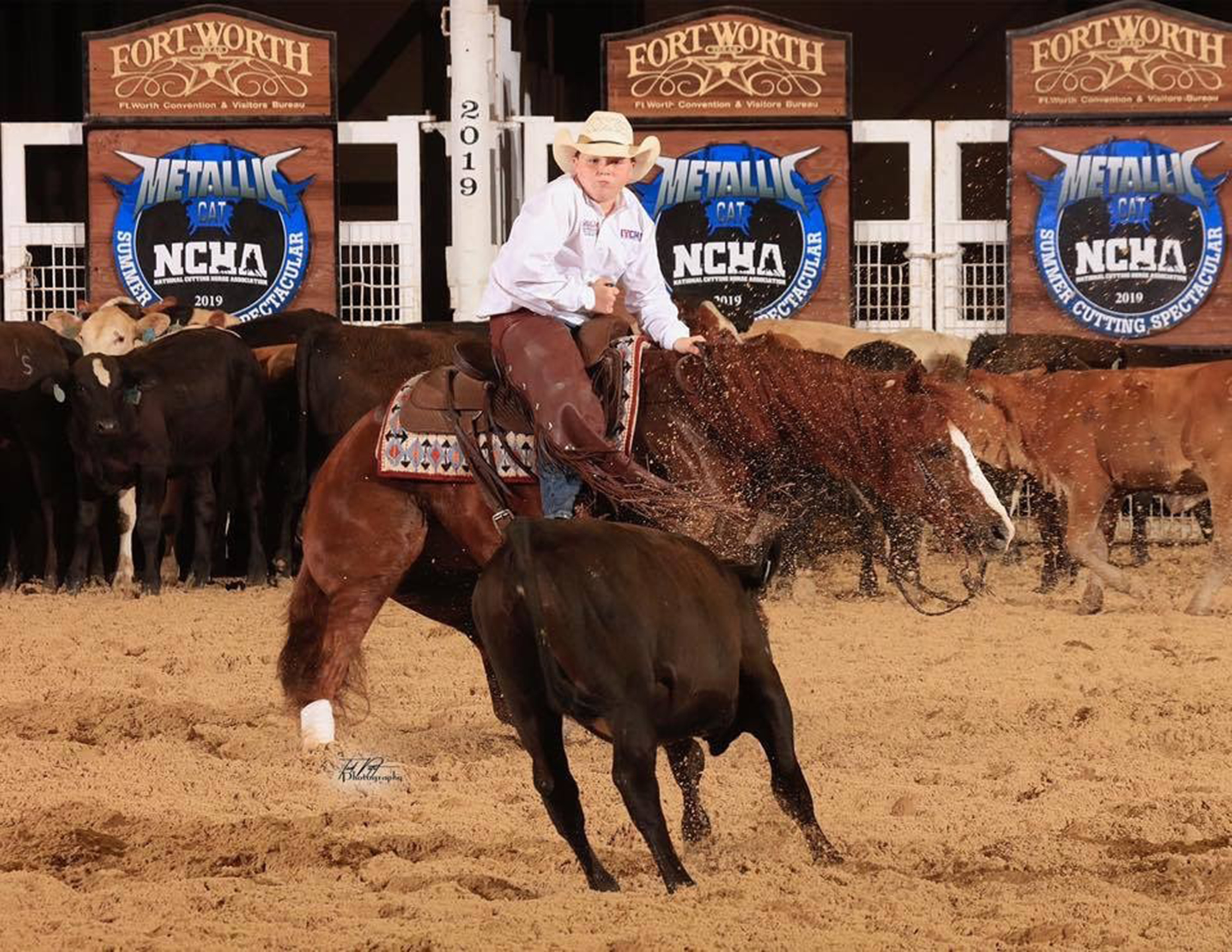 Question: What is your age?
Answer: 11

Q: What grade are you in?
A: I just started sixth grade.

Q: How long have you been cutting?
A: Six years.

Q: What’s the name of your favorite horse?
A: My horse is my favorite, Spin to You.

Q: What do you like most about cutting?
A: Cutting horses make such cool moves! It’s such an adrenaline rush.

Q: That’s fantastic. What are your cutting goals?
A: I’d like to make a lot more World Finals. 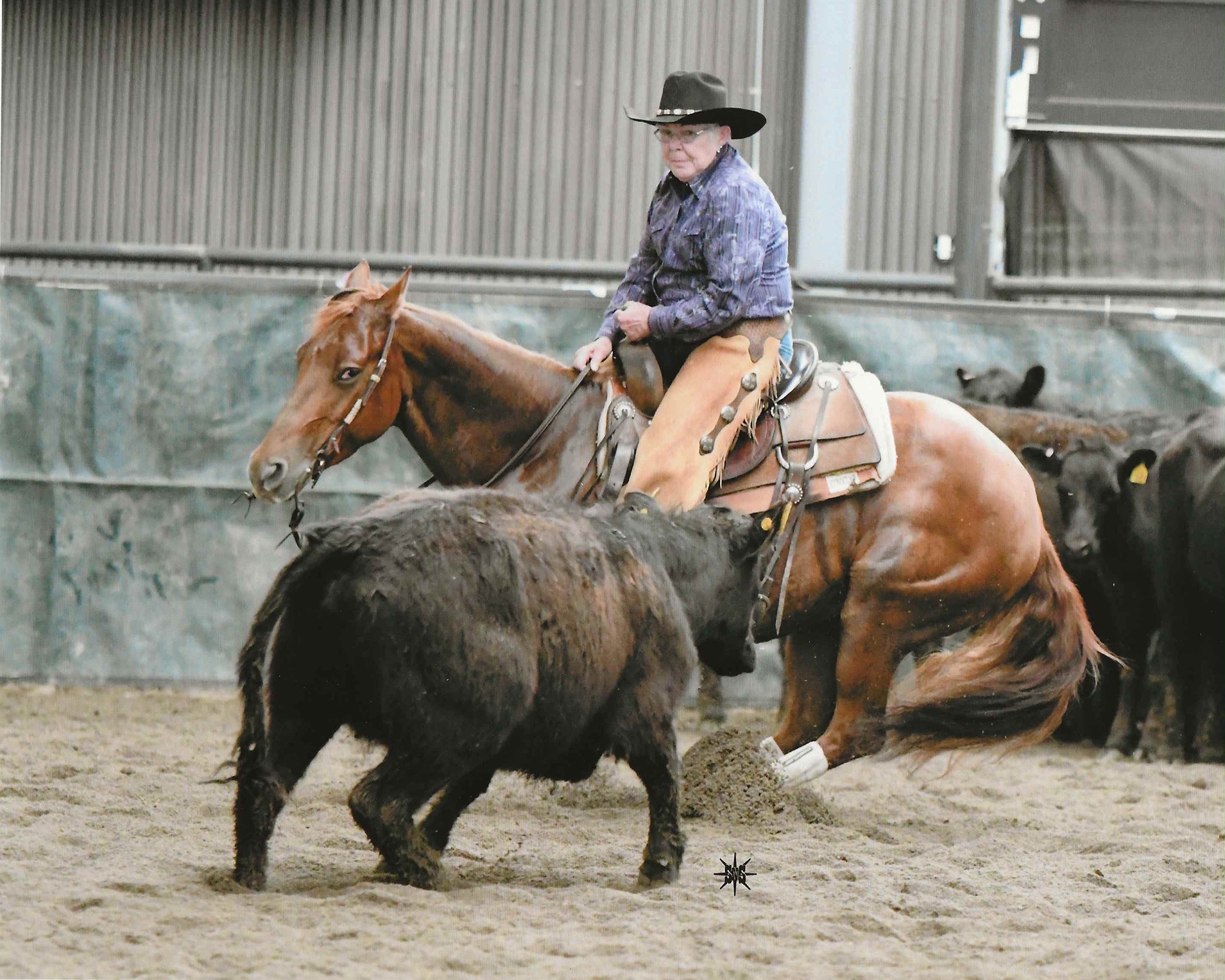 The first cutting horse Margaret Mehle bought taught her a lesson — but not the one she wanted to learn.

This was in the early 1980s, in Oklahoma, and Margaret, a physician, had recently returned from Texas, where she had watched the National Cutting Horse Association (NCHA) World Championships.

“I was dating a cowboy at the time and he took me to the Texas cuttings,’’ she recalled. “All my life I wanted a horse, from the time I was a little girl. But I never got one. And as I watched those championships in Texas, I thought, ‘I can do that.’ ’’

Returning to Oklahoma, Margaret soon attended her first horse sale. A mare caught her eye, and when that horse left the sale ring, Margaret owned her.

“But when I got that horse to my trainer’s barn, the drugs she had been given at the sale wore off, and she was a completely different mare,’’ Margaret recalled. “My trainer couldn’t ride her, and he wouldn’t let me ride her. She was too dangerous.’’

A Virginia native, she had attended medical school on a public health scholarship, and upon graduation, she was assigned to provide medical care at a federal prison in El Reno, Okla.

“I loved Oklahoma then, and I still do,’’ she said.

Margaret’s second horse sale ended more positively. This time she left with two horses, one of which, a Doc Bar-bred gelding, was her buddy for 31 years.

In the late 1980s and 1990s, Oklahoma was alive with cutters, cutting horses and cutting competitions. “You didn’t have to travel much more

than an hour and you could find a cutting most every weekend,’’ Margaret said.

When she retired in 2014 after a long career as a family practice physician, Margaret moved north to St. Paul, drawn there by her two adult children, Susan and Josef, both of whom live in Minnesota’s Capitol City.

“I figured with the move and everything, I would get out of cutting,’’ she said. “But eight months later, I found myself at a cutting in Winona, where I met Mary Farr, who was riding at the time with Bob Janssen. One thing led to another and before long I went to Bob’s place and rode one of his horses.’’

Physicians don’t use the word “addict’’ lightly. But that’s how Margaret describes herself when the subject is cutting.

“My thing always has been young horses, and the first horse I bought from Bob was a 5-year-old,’’ she said. “I started enjoying cutting again immediately.’’

Each was acquired from Janssen, or with his help, and this summer, at cuttings in Minnesota, North Dakota, Montana, Oklahoma and Colorado, Margaret has regularly found herself at the pay window, as has Janssen, riding her horses in novice classes.

“Bob has helped me a lot,’’ she said. “I’m at his place two or three days a week in the summer. In winter, I’m probably there, riding, as many as five days a week.’’

Janssen says working with Margaret is a trainer’s dream.

“Margaret is so passionate about the sport of cutting,’’ he said. “She genuinely supports everyone in the sport, and while she’s a fierce competitor, she’s very real about all the facets that go into success.’’

This fall, she and Janssen will show her 3-year-old mare, who’s by Kit Kat Sugar, in small futurities.

“She’s really a nice horse,’’ she said. “Next year I hope to show at the big Futurity in Fort Worth. My 2-year-old stud is by Hottish and he’s coming along really well.’’

Said Janssen: “Margaret is such a gracious woman to be around, and her enthusiasm is contagious — not just to my wife, Anita, and me, but to our entire team. She’s become a part of our family. The sport is lucky to have her.’’